Travel to Ladakh Tourism - The Cradle of Buddhism 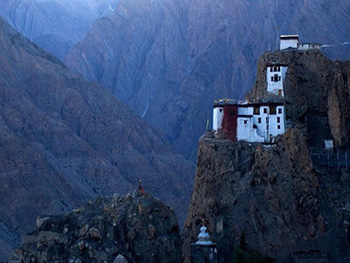 Ladakh - The Cradle of Buddhism, the land of jagged peaks and barren landscape is attractive and overwhelming. Hidden behind this harsh and forbidding façade is an ancient civilization and charming people of Ladakh. This awesome wildness and magic belongs to that great land of towering mountains and Buddhist simplicity-Ladakh. The main travel places in Ladakh- India are Leh, Kargil, Lamayuru Monastery, Nubra Valley, Pangong, and Tso Moriri Lake. 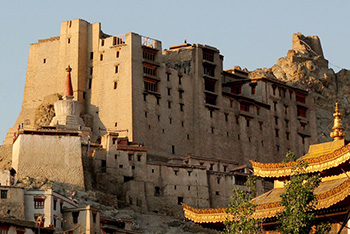 Location: The capital of the Ladakh region, Leh is towards the eastern parts of Jammu and Kashmir. It is perched at a height of 3,500 m above sea level. The area is watered by the Zaskar River, which flows into the Indus River just below.

Tourist Destinations: the Leh Palace is one of the main fascinations here. Above the palace, at the top of the Namgyal hill, is the Victory Tower, built to remember Ladakh's victory over the Balti Kashmir armies in the early late 15th century. The Namgyal Tsemo Gompa, built in 1430, contains a three-story high Buddha image and ancient manuscripts. 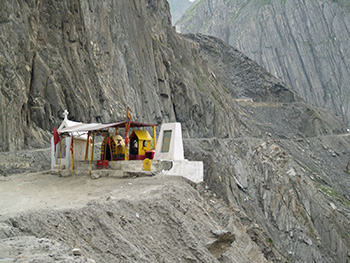 Location: The city trade and transit centre of the Pan-Asian trade network is located at an altitude as high as 2,700 m. Kargil is the second main urban centre of Ladakh and also the entrance for caravans of carpets, silk, brocade, felts, ivory et al to China, Tibet, Yarkand and Kashmir in the past.

Tourist Destinations: Kargil offers many opportunities for adventure tourism and trekking tours. You may take up trekking, mountaineering, river rafting et al. At a distance of 39 kms is Mulbek. The banks of the Wakha River are value visiting for its Buddhist monuments. On the highway Mulbek, Chamba, an ancient 10 m high rock sculpture of the future Buddha Maitreya is a main traveller fascination. Wakha Rgyal in the Wakha Valley ahead of Mulbek. The cave monastery at the village of Shergol in the Wakha River valley happens to be a main traveller fascination.

Situation: Once being a part of the trading route that linked eastern Tibet with Turkistan via the well-known Karakoram Pass, The Nubra Valley is the best recently opened area of Ladakh. Nubra valley offers you to a trip back in time into a nearly for gotten 'Shangri La'.

Tourist Destinations: Diskit is the governmental centre of the Nubra Valley. Diskit appears like a ghost town. An enjoyable day's walk brings one to Somoor, half way to Panamik. Army trucks are the only means of transportation in the valley. The 250 years old Ensa Gompa, nestled on top of a rock overseeing snow-peaked mountains across the valley is much further away than it looks. 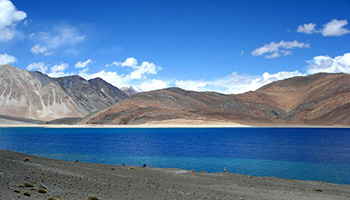 Situation:Located at an altitude of 4,360 meters above sea level, Pangong Lake lies in the northeast of Leh. This well-known blue blackish Pangong lake is 7 km wide and around 146 km long with half of it running to the other side of the Indo-China border..

Tourist Destinations: The 165-km trip to Pangong Lake from Leh is an exclusive experience of its own kind. The first halt on the way is Thiksey village well-known for its monasteries covering an whole mountain ridge. The second halt is the Changla Pass (17,360 ft.), which could test ones lungs, for the lack of oxygen. At Darbuk village, near Tangste Valley, stands a chain of war memorials with regimental symbols in memorial of the soldiers who lost their lives during the Indo-China war of 1962. 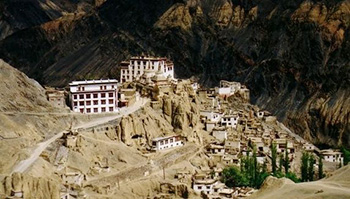 Situation:Lamayuru Monastery is located along the Leh Srinagar road in between Bodhkharbu and Kha-la-che on a steepy rock mountain. Even before the advent of Buddhism, it was a well-established shrine.

Tourist Destinations: It has old and new Lha-khangs and Buddhist meditation centre. In the late tenth century A.D., Naropa meditated here in a cave, whose identity is preserved in New Dukhang of the monastery. Rinchen-bzang-poestablished five Lha-Khangs and many chortens, some of which still exist in ruined conditions. 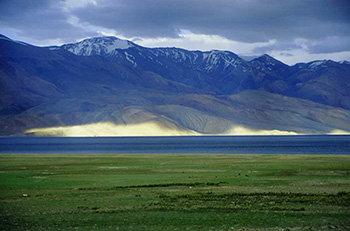 Situation:Tso Moriri Lake is located among the elevated district of Rupso. Its name is distinguishing of its situation. Nestled in the midst of 19,000 feet high peaks which totally shut the lake, Tso Moriri Lake is a must visit place in India.

Tourist Destinations: The clear blue lake is one of the most wonderful fresh water lakes in Ladakh. The locals consider the lake the sacred one. Beautiful peaks like Mt. Mentok and Mt. Kharlung on the right side and Mt. Kurchu and Mt. Lungser on the left side surround the Lake.


How to Reach Ladakh

Air: The nearest airport is Leh. There are flights from Chandigarh, Delhi, and Srinagar to Leh. It is a two-day journey from Srinagar to Leh (450 kilometers) with an overnight halt at Kargil.

India Tour Makers offers tour packages to Ladakh. For more info or to book a tour, please enter your query in the form specified.